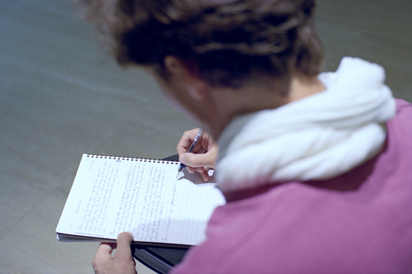 What happens when you imitate someone, or to be more precise, someone’s handwriting? Does it bring us closer together or make us aware of our differences and our own distinctiveness? Over the course of several weeks, two individuals will be reactivating this work from the FRAC collection by copying extracts selected by the artist; then each will imitate the way in which the other puts words down on paper. Gradually, they will succeed at getting closer to what seemed simple to the other: tracing lines whose forms are partly tied to that person’s individuality, and yet bearers of a shared language.

Featured as a part of the 2018 edition of the Grand Est region’s Week-end de l’art contemporain, organized by the Versant Est, LoRA, and Bulles networks.

“Two participants (a man and a woman) remain in the same room, seated back to back in classroom chairs four hours a day, for thirty-six days, copying each other’s handwriting.” Written so as to simulate a school exam, the rigorously determined protocol of Exchange of Handwriting hints at a reflection on learning and education. But its objective is openly displaced, even discreetly subversive with respect to the ideology of education, generally based on the homogenization of knowledge and methods. Instead of imitating regular and generic letters, the participants are forced to copy a specific handwriting sample, a physical signature, and thus, in part, a personality. As we know, experts in handwriting and graphology associate the handwriting to an individual, and even claim that the script reveals psychological attributes. Exchange of Handwriting is thus not a test of learning the codes of writing, but instead a true “role play” based on symbolically relinquishing one’s own identity for the sake of another’s (which, on top of it, is “transgender”).

In 2006, the artist himself exchanged his handwriting with that of a New York musician, Christiana Courtin, whom he had chosen for her cultural and social background which was distant from his own. At the outset of the exchange, the notebooks of each of the participants were a part of the exhibition.

The work of a copyist, as in the pictorial tradition but reenacted in the domain of the arbitrary and the absurd, as a performance whose traces preserve a sentimental and romantic value, is conducive to a reflection on individual techniques of writing contested by the logic of didacticism and by the use of a keyboard. Moreover, thanks to the arbitrariness of the imposed rule and the participants’ back-to-back position—designed to prevent copying even while this is precisely their task—_Exchange of Handwriting_constitutes, beyond its ludic aspect, a mute denunciation of administrative constraint and authority.

At a deeper level, the performance questions the foundations of linguistics, and in particular of the divide between the meaning and the written word, between the signifier and the signified, between the mind and the body. Through the act of copying, writing seems to become reified, abstracted from its semantic necessity, draining the composition of its meaning by dint of the laboriously mechanical character of the work. In that sense, the result brings to mind the conceptual artist Hanne Darboven and her endless repetitions and permutations of handwritten characters. Rather than artisanship or virtuosity, the artist displays a sort of a mechanical unconscious. This is a form of knowing evocative of the figure of Jacques Rancière’s “ignorant schoolmaster”1 which dissociates cognitive and pedagogical practices from a priori knowledge, and even from understanding of what is being transmitted.
In 2002, the artist organized a giant Scrabble match, bringing together nine artists of different nationalities, each playing the game in his/her own language and without a limit to word length. The game board expanded to over 200 square meters, using as many as 40,000 letters. As in the Exchange of Handwriting, communal use, constructing, and sharing did not result in idiomatic understanding.

Featured as a part of the 2018 edition of the Grand Est region’s Week-end de l’art contemporain organized by: